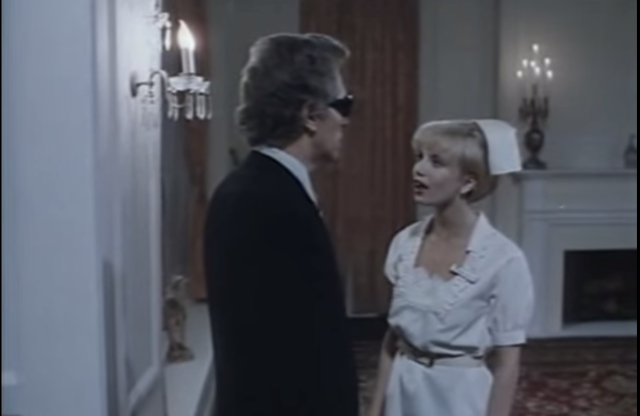 Not of This Earth made an interesting contrast after just having watched Wishmaster 4. Both movies feature similar levels of gratuitous sex and nudity, but while it felt just as lifeless as the rest of the movie in Wishmaster 4, in Not of This Earth it fits right in with the rest of the weirdness. I could not in good conscience call this a good movie, but it’s bad in interesting ways. An alien in the form of a mysterious man in black comes to Earth to assess humanity’s potential to be domesticated and used as a source of blood for the aliens, who are suffering from an ailment which is turning their blood to dust. It’s ridiculous, but in a weirdly interesting way. Traci Lords plays a nurse who gets hired to administer blood transfusions to the mysterious man in black, and unsurprisingly every opportunity to have her wear as few clothes as possible is taken advantage of. Which in a way is a bit of a shame because she may be the best actor in the movie.

Wishmaster 4 has an unfortunate air of softcore porn about it. Which is only partially a result of the gratuitous sex and nudity. Rather it has the flat, disengaged feeling of something produced only as a vehicle to deliver sex. Only in this case, there’s not enough sex to make it worth anyone’s time. Which is a shame because there are themes and ideas here which would have been worth exploring, such as sexual dysfunction, jealousy, and love. There’s also potential for an interesting story when the angelic adversary to the djinn turns out to be almost as bad as his foe. Alas, none of it leads anywhere interesting, and the journey there is mostly dull despite an occasional flash of the old maliciously entertaining djinn from the first two movies. The problem is that this movie is neither good enough nor bad enough to be interesting. I must not have watched Star Trek Deep Space Nine before the first time I saw Hellraiser 3, because I had not realized that Terry Farrell (Jadzia Dax in DS9) played the main character. It was really nice seeing her in a different role. And she does a pretty good job as the intrepid young reporter who gets drawn into, well, hell. Like the second movie this one continues where the previous one ended, but this time with an entirely new cast except for Pinhead. For basically being the same thing for a third time, I think it’s a pretty good movie. My main complaint is that the demon Pinhead is reduced to a more mundane evil in this movie. As one character actually says, there used to be rules but now the demon is free to do whatever it wants. The end result is still torture and death. But especially in the first movie you got the sense that the demons were not so much evil as alien. They brought pleasure and new experiences through unimaginable pain. Whereas in this movie Pinhead kills people because he likes it. Which I find a far less interesting concept. Still, as I said, I like the movie. 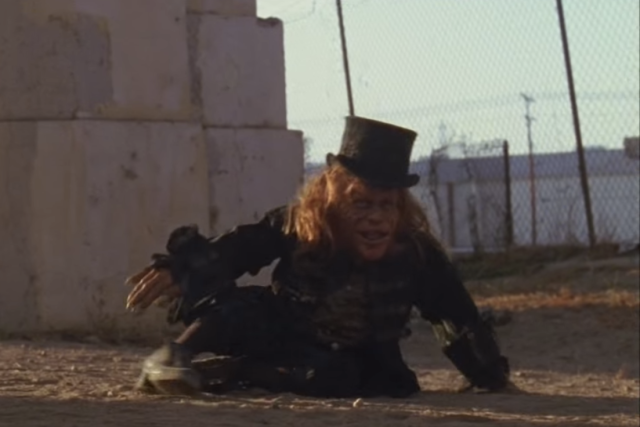 I really like the Leprechaun movies. They’re rather terrible, obviously, but in such a fun way that I find it almost impossible to resist their charm. So I was looking forward to seeing this one, the last one (not counting this year’s reboot) that I hadn’t seen yet. Unfortunately it was a bit of a letdown. I didn’t get the sense of malicious fun that flowed through the previous movies. It felt like this movie was going through the motions, lacking whatever vital spark animated its predecessors. It wasn’t awful, but simply… not fun.

Perhaps it’s a result of severely lowered expectations, but I found World War Z to be decent, and as I’ve mentioned before I don’t particularly like zombie movies. The science in it is preposterous, of course, but if you manage to turn off the more logical parts of the brain the movie is a fun ride. I will say that I think it starts out strong and then gets gradually weaker as it goes on. 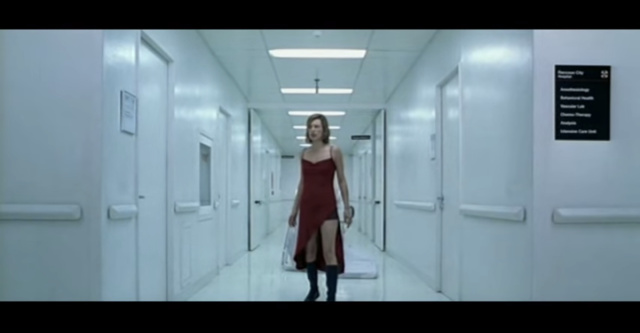 Resident Evil Extinction is more Resident Evil, this time taking place in a post-apocalyptic setting (suitably enough considering the previous movie’s title). Your reaction to that will largely depend on how much you liked the two previous movies. I thought this one was fine, just as I thought the two before were. It’s still an action movie set against a horror background. The movie sets up for a sequel (quite spectacularly so) that I would probably be really excited to watch if I was more invested in the series. As it is I’ll get around to it eventually but I’m in no particular hurry. It’s interesting seeing Iain Glen in another role than the one he’s now famous for.

There’s Nothing Out There is a fun little movie about a group of teenagers going out in the woods for a weekend, and per tradition get killed one by one by a monster. The twist to the story is that one of the characters recognises all the signs of being in a horror movie from the start, and tries to warn the others. The movie mostly doesn’t go as far as to break the fourth wall, but hops and skips over the edge. It’s clever but stops short of being great. Nonetheless, after nearly a month of watching horror movies it was refreshing.

I watched every single episode of the X-Files as they aired, but I haven’t seen this movie until now. I knew people had found it underwhelming when it came out, but that was it. Expectations suitably lowered, I found myself thinking it would have made a decent if forgettable episode of the show. It wasn’t bad, it was nice to see the actors reprising their roles, but ultimately the movie added nothing much to the world of the X-Files. 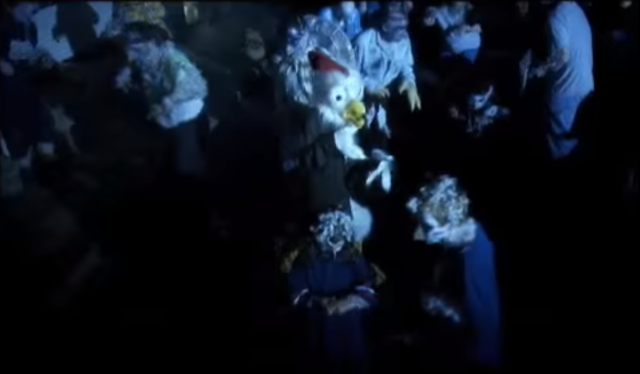 Poultrygeist is the second Troma film I’ve watched, and I think I’m getting the hang of what they are. I.e. I appreciate what they do, but it’s not necessarily for me. This is a movie I would show to someone who is easily offended to induce a stroke in them. The baseline toilet humour is frequently peppered with more, shall we say, outrageous humour. As in likely to cause outrage in some people. But I’d say that the movie is more or less an equal opportunity offender that doesn’t pick sides, except perhaps against those who take themselves seriously. Personally I like a bit more horror in my horror comedies, while this one goes for gore and gross out. If you go in expecting that, you may well like what you find. There’s certainly a lot of it. 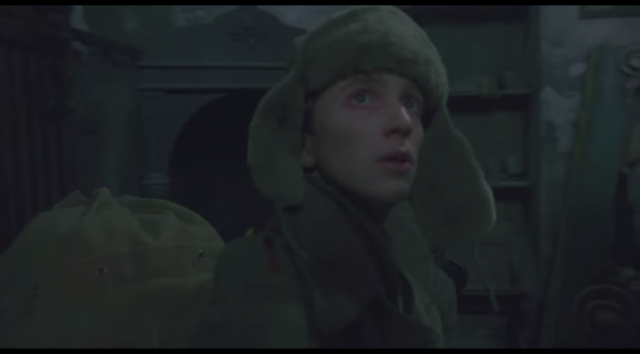 I started watching Frankenstein’s Army without any big expectations beyond being mildly entertained by a monster movie. Just the concept of Soviet soldiers pushing into Germany at the end of the second world war and encountering creatures created with the help of the research of doctor Frankenstein ought to be enough on its own to drag any movie to at least the level of mildly interesting. I was sadly mistaken.

To start with the movie is hugely hindered by using the found footage format. It breaks the suspension of disbelief beyond all redemption when the character who is supposed to document the small group of soldiers’ advance into Germany runs around with the camera and uses it in ways that would not be possible for decades. Had they used more period appropriate methods, it could have made for a very interesting movie. Instead the format serves to exaggerate all the other flaws.

Other flaws? There are a fair few. Starting with every character that has any personality being an asshole. And not in an interesting way. That does mesh well with the soldiers being the most undisciplined military unit in the history of warfare. You might very well imagine some commander sending them on a suicide mission just to get rid of them. Unfortunately, that is not the story.

In fact, what little story there is serves only to get the characters in place to be killed by the monsters. Which would be fine, going for atmosphere over plot, except that there is no atmosphere to speak of either. Just dodgy accents that come and go, and characters running around being so unlikable you don’t even perk up when they are inevitably killed. The monster designs are decent, but that is just about the only positive thing I can say for the movie.